NetherWorld has experimented great progression since last time we posted an update. However, first of all...

During these months we realized we didn’t explain how NetherWorld gameplay structure will be like. Let’s do it now!

Nope, NetherWorld is not a Metroidvania.

NetherWorld has 3 different game modes you’ll alternate during the gameplay:

The town scenario has changed A LOT since we started its development. You’ll play it at night, but also in a beautiful sunset.

Deumanville is also the home of Medoo, our miserable protagonist, and the place where everything begins.

So we have the “Where”. Now here’s the “Who” that starts it all.

Cubick is a cokehead mage who’s hiding from the Mafia. Why? Don’t know yet. But what we know is he’ll be involved in all the boss town fights... And will involve you in them, of course.

We’ve fully developed the 2 bosses you’ll find in Deumanville. And you know what? You’ll have to face them unarmed. Yeah… Shit happens.

We tested it on Nintendo Switch too! (It will look similar to this… but without sword and shield).

There’s nothing more deathly than a party with Cubick. Wait... Is that a unicorn?

However, Deumanville is not the only scenario with changes.

Howdy, strangers! The first desert scenario was cool, but it had contrast problems between most of its elements. 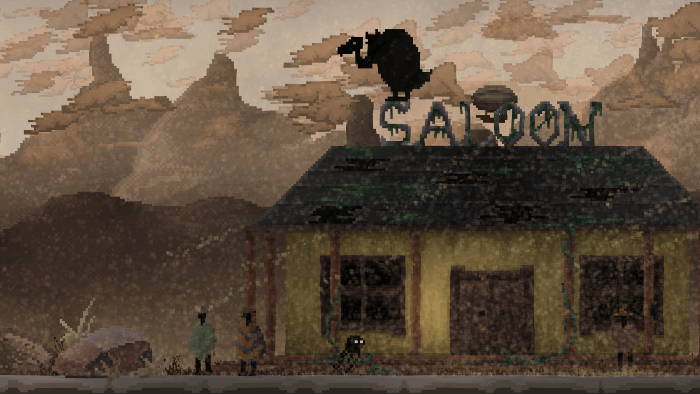 Our artist Erien has been working on a new design, which is still under development (particles, people, plants, decorations...). However, we’re very satisfied with this new direction.

We also developed a never-ending parallax system so you’ll be able to run through NetherWorld’s hottest place all you like. Enjoy the views!

In the next update we’ll show you more about the desert!

This system was improved when developing Xenus mechanics. This way Medoo will be able to handle tough objects and throw them wherever he wants.

Besides normal dialogues, now you’ll have the chance to ask multiple questions to some NPCs, and they will be able to change due to external events.

>> Look at these curves!

We want you to enjoy Medoo’s suffering no matter the situation, so we added some outlining when his body is hidden. Don’t miss a thing!

Well, not really. But we’ve had the great opportunity to explain the project to wonderful people in different media, even in a live on Mixer! Check it out if you want!

Oh... Did you arrive here? To show our gratitude we’ll give you (FOR FREE!) some ways to be the first to know about NetherWorld development!

Thanks again for your support and see you soon!


It's great to see how far you have progressed, Well done.